One more time, on the deep night of the black canvas, the brushes have danced their graceful ballet. The Womanity audience has immediately been catched by the luminous gesture of Michaël Raivard performing in a musical ambience. The suspense was intense in the ballroom during the few minutes preceding the sparkling reveal of his artwork… In a golden stardust, generously spread, he gave life to one of the most symbolic free woman of the 7th Art… Brigitte Bardot.
And touched each heart with this unspeakable emotion surging when the glittering light effloresces the canvas’s night. This Michaël Raivard’s artwork has been awarded chf 120’000 during the following auction that has raised a total of chf 2 millions. And his contribution also included another portrait of Nelson Mandela, awarded chf 70 000 under the hammer of Simon de Pury, helped by Mokobé and Pauline Lefevre.
The night’s program lead by Mareva Galanter and Simon Kidston, included stunning performances by the Pockemon Crew, the Duo MainTenant, the singer Ayo, Licia Chery, Mokobé, Micah and the Discobandits. They have seduced the prestigious Womanity guests, among whom the French Minister Yasmina Benguigui, Caroline Gruosi-Scheufele of Chopard, Francesca Versace, Jean Claude Jitrois, Philippe Pasqua, Jean-Claude Biver of Hublot…

“What a night! We are immensely privileged to have such generous and faithful supporters”. Yann Borgstedt, founder and chairman of the Womanity Foundation. 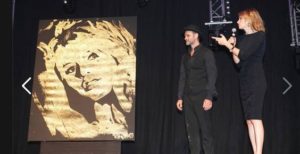